We are a community of Christians who strive to practice our Christian beliefs in all of the activities that each of us participate in during our daily lives. We believe that by sharing God’s love and mercy, we can help others to enrich their lives by giving them basic values for their relationships with God, family and their fellow man..

We do this through the many activities of Old North United Methodist Church. In each of the activities we fully understand that by reaching out and helping each other understand the grace of God, that all of life’s trials, tribulations, joys, and sorrows are put into perspective of living in a Christian community.

Home of the Historic 1832 Chapel

The Old North United Methodist Church chapel is the oldest documented public building in Vanderburgh County. It is also believed to be the oldest building in use as a United Methodist church in the state of Indiana. The land where the chapel was built and still stands was in the community which was called Mechanicsville in the early 1800s. Mechanicsville was strategically located on the old trail used by Native Americans and settlers to travel from the Ohio River north along the current path of Stringtown Road.  A number of tradesmen and craftsmen had settled in this area, and thus the name Mechanicsville was given to the community. 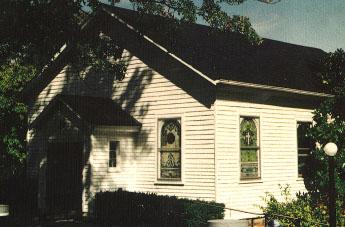 In 1831 the people of Mechanicsville, too far from Evansville to use schools or churches located in that larger community, identified the need for a meetinghouse. The meetinghouse would be a community-wide benefit, used as a school, a church, and a general meeting place. The Mechanicsville School Society and Congregation purchased one and one-third acres for their meetinghouse from Thomas and Louisa Hutson for $13.

Community members from all denominational backgrounds in the area worked together to build the meetinghouse, the building which we now call Old North Chapel. It was built largely from native materials. Stones for the foundation were hauled by mules or oxen from nearby Pigeon Creek, up the treacherously steep hill. Likewise, lumber was locally sourced from sawmills on Pigeon Creek. Handhewn beams, mortised and secured with wooden pegs, are still visible today

Although the original 1832 building still stands, there have been numerous alterations and additions to the church property. In 1923-1924 a community hall was added to the rear of the chapel building.  In 1953 ground was broken for a new sanctuary building. In 1971 the current Christian education wing was completed. In 1997 a major renovation, remodeling, and redecoration of the sanctuary, narthex, and parking area were undertaken.

The Old North United Methodist Church chapel stands on its original foundation in its original location, with a very long history of serving the community where our forebears built it. It is of historical importance not only because of its age, but also because of its history of service to diverse populations.  The use of the building was not intended to be exclusive, and over the years it has served as church, school, and meetinghouse for community residents regardless of their faith, their creed, or their race. Community events have been held in the building since its early days.

It was used as a school for African American children when Stringtown School, open only to white children, was built. Oral history indicates that the building was a stop on the underground railroad, assisting slaves in their trek northward to freedom.

In the 20th century, the church served as home to numerous community groups and during the 1937 flood Old North Chapel and the community hall housed over 120 refugees and served over 7,000 meals. In the 21st century, Old North remains a vibrant community resource, serving the United Methodist faith community, Old North preschool members, the community at large, and reaching beyond through a strong commitment to mission including an active Fair Trade Market.